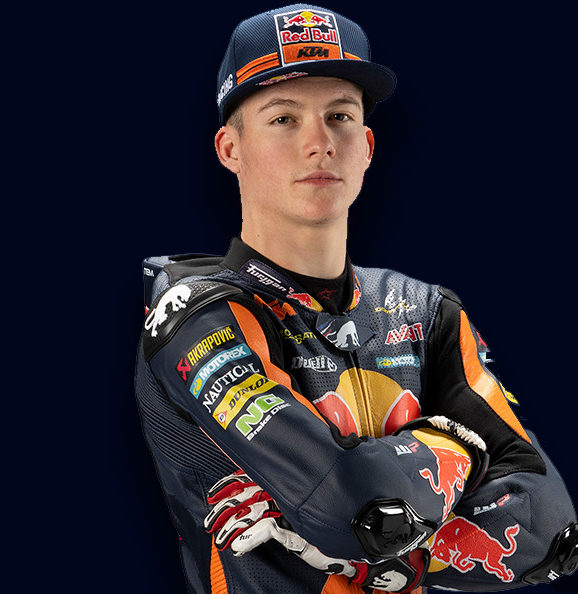 Dani Holgado was born in Sant Vicent del Raspeig, Alicante, Spain, on May 27th, 2005. The Spanish rider inherited his love of motorcycle riding from his father, who would take him to circuits to show him his hobby.

At the age of six, Holgado began his career in motorcycle racing. His early years saw him win championships and promotion cups.

2015 saw a big step forward in his career, competing in the Moto4 Spanish Championship. In his rookie season, he finished in the third position and was runner-up the next year.

Holgado moved to the Pre-Moto3 category in 2017, a season that he ended in the sixth position. In 2018 he arrived in the FIM CEV to compete in the European Talent Cup, earning 11th in that competition.

In 2019, the Spaniard was promoted to the FIM Moto3 Junior World Championship, a springboard to top-level competition. In his debut season, Holgado finished in a solid sixth place. The following year, 2020, he ended in the fifth position, as well as participating for the first time in the Red Bull MotoGP Rookies Cup and claiming fifth.

It was in 2021 that Holgado established himself as a great talent, winning the FIM Moto3 Junior World Championship. He also claimed third place in the overall standings of the Red Bull MotoGP Rookies Cup. In terms of World Championship experience, he made his first appearances at the Catalunya Grand Prix and the Algarve Grand Prix as a stand-in rider.

In 2022, Holgado joins Red Bull KTM Ajo for his first full season as a World Championship rider. He feels prepared for this new stage in his career and for further growth as a rider.