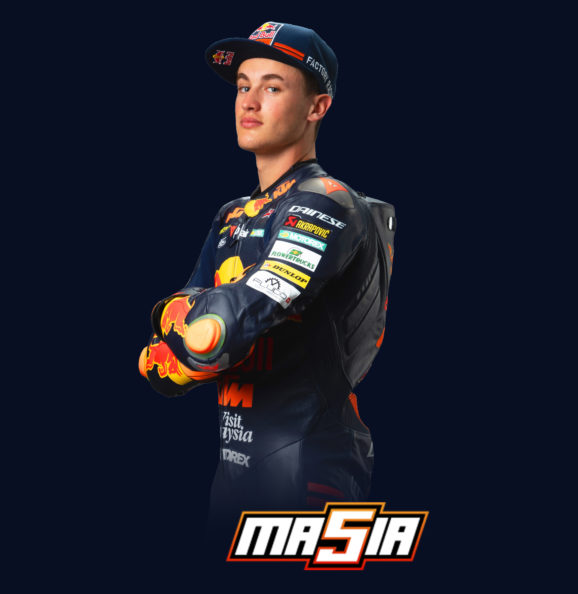 Jaume Masia was born on October 31st, 2000 in Algemesi, Spain. His passion for motorcycle racing runs in his family, since his father competed in various championships in Valencia, Spain and Europe. He passed a passion for two wheels on to his son, who received his first bike when he was five years old.

In 2009, Masia won his first title in the Valencia Mini Motorcycle Championship and would win the 140cc class in the Cuna de Campeones the following year. It would be in 2014 that he made his debut on the international stage, participating in the Red Bull MotoGP Rookies Cup, before moving to the FIM CEV the following season.

After two campaigns in which he took continuous steps forward, in 2017 the Spaniard finished second in the FIM Moto3 Junior World Championship, with a total of 6 podiums and a first victory in Aragon. That same year, he also made his debut in the Moto3 World Championship, where he sprung a surprise by setting the fastest lap and finishing 9th at the Austrian Grand Prix. In addition, Masia participated in the British, San Marino and Aragon GPs.

In 2018 the Spanish talent contested his first full season in the Moto3 World Championship, regularly obtaining results close to the top and racking up two fastest laps. Jaume Masia was named Rookie of the Year in the class.

The 2019 season would confirm his talent and progress. The young Spaniard achieved his first victory at the Grand Prix of Argentina and a further three podiums in Austin, Mugello and Sepang, showing he was a fast rider capable of fighting at the front.

Jaume Masia was one of the men to beat in 2020. Despite difficult circumstances and an atypical calendar, he was fast throughout the season and constantly in the fight for wins. He ended the year with two victories, three podiums, two fastest laps and a pole position, placing 6th in the overall standings.

For 2021, Masia joins Red Bull KTM Ajo in his quest to continue growing and fighting for the title. He will try to maintain the good pace that he showed last year and be one of the candidates for Moto3 glory.