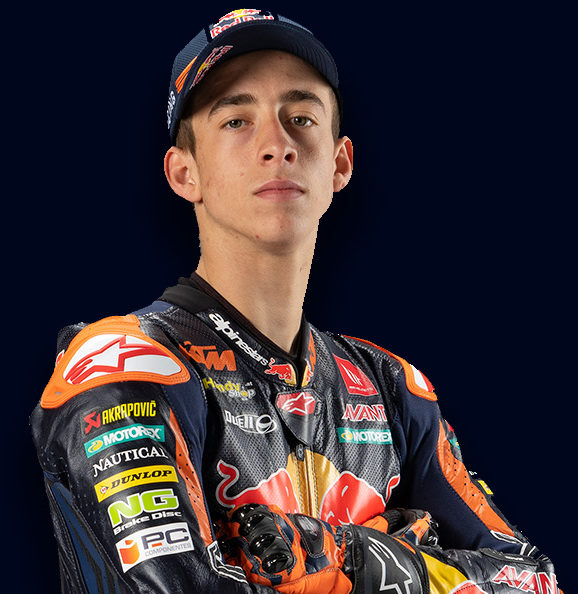 Pedro Acosta was born in Mazarron, Murcia (Spain) on May 25th, 2004. His first experience riding a motorcycle was at the age of five, when his father gave him a motocross bike. From that moment on, there was no dulling his passion for two wheels. Aged 12, in 2016, he was runner-up in the Spanish Mini Velocidad champion, and a year later he was proclaimed Spanish champion in pre-Moto3.

His debut in international competition took place in 2018 in the FIM Moto3 Junior World Championship, as part of the FIM CEV, as he participated in three rounds that season -aged just 14.

In 2019 he enjoyed another season in the FIM CEV. That same year, Acosta also raced in the Red Bull Rookies Cup for the first time. His adaptation to the promotional cup was very fast, and he was considered a breakout star, claiming three victories, and finishing runner-up in the series.

2020 was a dream year for Acosta. He won the first six races of the Red Bull Rookies Cup, becoming the first rider in history to do so. His dominance and consistency were such that he was proclaimed champion with two rounds to spare. In addition, he also competed in the Moto3 FIM CEV, for the third consecutive season, finishing in third place in the overall standings.

Acosta came into Grand Prix racing at the beginning of the 2021 and dazzled everyone, getting onto the podium at the inaugural round in Qatar. One week later, the young Spaniard did even better, achieving victory at the Doha Grand Prix, starting from pit-lane and making up a more than 11-second disadvantage in the race. With subsequent wins in Portugal and Jerez, Acosta became the youngest rider to earn three consecutive victories, and the only man to take four podiums in his first four World Championship appearances. Solid performances and success followed, with Acosta winning the German GP and the Styrian GP. After a victory at the Algarve GP, he seals the Moto3 title with 6 victories and 2 podiums, with one race remaining of the season.

The Red Bull KTM Ajo rider will step up to Moto2 with the team in 2022, looking to continue his stunning trajectory.