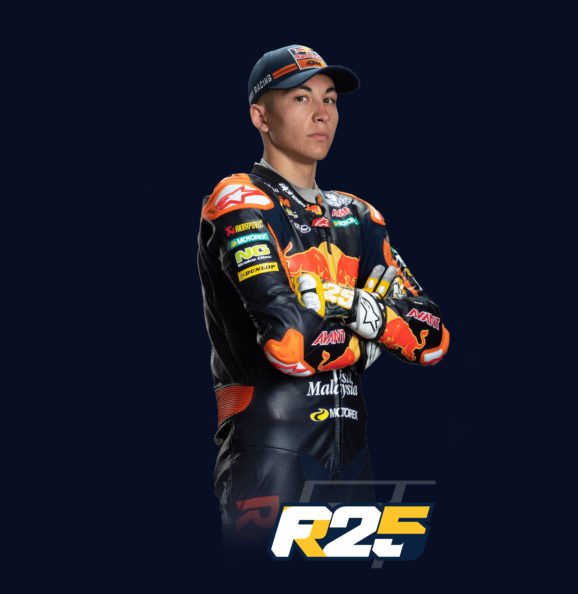 Born in Madrid in 2000, Raul Fernandez has his father to thank for his passion for motorcycle racing. The Spaniard made his start in the sport at 11 years old, looking at photos of his father from his riding days.

Following his beginnings in the Cuna de Campeones and PreMoto3 series, Fernandez’s career began on an international level in 2015, when he participated in both the Red Bull MotoGP Rookies Cup and the FIM Moto3 Junior World Championship. He earned three podiums in the second half of the year in that contest and finished inside the Top 10 at the last four races of the FIM CEV.

In 2016, the Spaniard took a step forward, claiming his first two wins in the Red Bull MotoGP Rookies Cup and keeping the title fight alive until the last round of the season, finishing third. In the FIM CEV he also ended third overall, with one victory on his record. In addition, that year saw his debut in the Moto3 World Championship, thanks to a wildcard appearance at the Valencia Grand Prix, with 11th place.

The following year, he took part in three other races in the Moto3 World Championship, while also undertaking his third participation in the FIM CEV. However, it would be in 2018 when Fernandez would become FIM Moto3 Junior World Champion, thanks to a perfect season in which he claimed three wins and seven podiums. The Spaniard also took part in the German Grand Prix t with Red Bull KTM Ajo, as a substitute rider, obtaining a magnificent ninth place. 2019 was its first full year in the Moto3 World Championship, and he took spots in the Top 10 at several races.

Last season – Fernandez’s first with the team – he took a notable step forward, showing maturity and consistency on-track. The Spaniard was the fastest rider across Free Practice, during the campaign, also claiming 6 pole positions and 10 front row starts. The Red Bull KTM Ajo Moto3 rider finished the year with two wins and two podiums, taking to the rostrum at four of the final five rounds. In addition, he finished fourth overall for the season.

For 2021, Red Bull KTM Ajo continue with Fernandez in their line-up, accompanying him on a move up to Moto2. At only 20 years old and after having shown a high level of talent in the lower cylinder class, he faces this opportunity with great enthusiasm and motivation to continue growing as a rider.